Many Westsiders drive by MARTA’s Brady Facility for Mobility every day, never noticing the many buses coming and going from behind a plain concrete wall along Brady Avenue. But aside from a fleet of buses and hundreds of workers, the site is also home to a particularly fun chapter in Atlanta’s history—a chapter that  artists may choose to highlight in a new public art project.

Alongside the train tracks that have brought so much industrial business to the Westside, the Peach Bowl Speedway was constructed in 1949 by Roy Shoemaker. It started as a quarter-mile dirt track, best suited for “midget” racing cars. The speedway had lights installed before it opened, which allowed for night racing long before it became common elsewhere.

The experiment was a hit, and in late 1950 the track was paved with asphalt to accommodate NASCAR racing. The Peach Bowl Speedway was also home to the Atlanta Stock Car club, an African American racing league whose members raced around the Southeast from the late 1940s to the mid-1950s.

The track originally had two separate grandstands for Black and White fans. But in 1965, when other White business owners were resisting the Civil Rights Movement, Roy Shoemaker combined the two grandstands into one integrated seating area. The track was even a Hollywood film location in 1970 for B-movie Corky, with Richard Petty as himself in the cast.

The Peach Bowl Speedway ran successfully for 22 years, with weekly races bringing in regular crowds of racing fans. It finally closed in late 1971, when longtime owner and promoter Roy Shoemaker passed away. MARTA purchased the property in 1972 and tore down the racetrack to build a facility for bus and maintenance operations. The site is now home to MARTA’s mobility (paratransit) vehicles as well as 400 employees, 15 repair bays, and five fueling stations.

The Upper Westside Improvement District is now partnering with MARTA’s Artbound and Living Walls Atlanta to bring the site’s past and present together. The plain concrete wall along Brady Avenue will soon be home to a commissioned mural; we are soliciting applications from local artists through Wednesday, July 15. There’s no lack of history to bring to light, but we’ll let the artists’ creativity dictate the artwork, which will convey hope and positivity amidst unprecedented times. 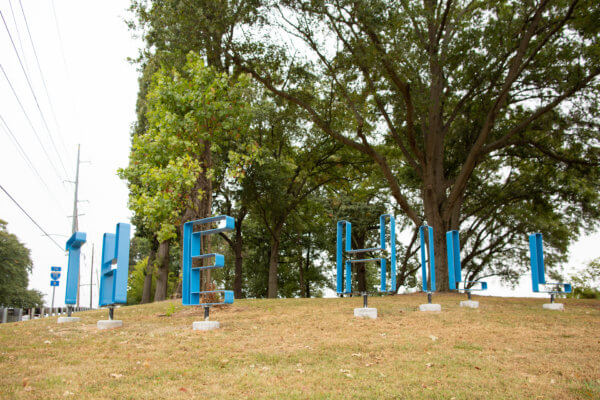